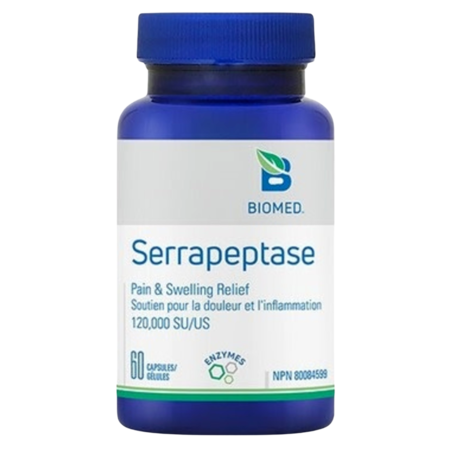 Share this product
Information
Serrapeptase is an proteolytic and mucolytic enzyme derived from the bacteria Serratia mercesans. As a broad spectrum systemic enzyme, it works to break down inflammation and break up excess mucous and congestion. It is used to support healthy respiratory and sinus function, as well as muscle, joint and overall tissue health.
Serrapeptase is used in the management of pain and inflammation, through reducing capillary permeability and regulating immune cell migration from the lymph nodes to inflamed and injured tissues. This enzyme breaks down inflammation caused by abnormal proteins and is able to dissolve by-products (damaged and dead tissue) of the healing response, without harming healthy tissue.
As a concentrated natural proteolytic enzyme supplement, our Serrapeptase is one of the strongest in the world, unrivaled with a potent 120,000 SPU (serratiopeptisdase units) per capsule. In addition, it is enterically-coated to maximize efficacy, allowing the enzymes to survive the acidic conditions of the stomach, leading to greater absorption.
Serrapeptase (also known as serrapeptidase, serratiopeptidase and serratia peptidase) is derived from a species of enterobacteria originally found in the intestine of silkworms. This bacterium, Serratia mercesans, produces the enzyme serrapeptase to enable the silkworm to dissolve its silken cocoon and emerge as a moth after metamorphosis. Serratia mercesans is now grown in cultures to produce serrapeptase by fermentation, thus is suitable for vegetarians.
Reviews
No reviews found
Read or write a review
Add your review

All rights reserved by InStijl Media