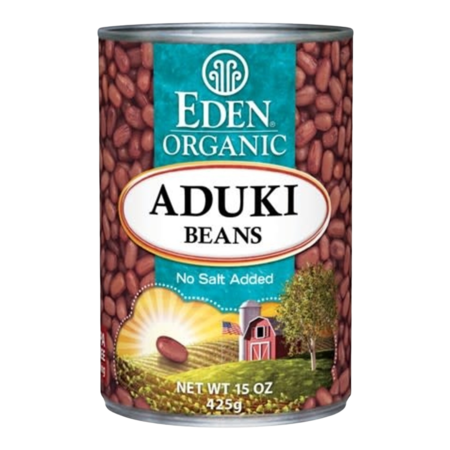 Eden Aduki Beans are U.S.A. family organically grown by those dedicated to cleansing the environment and producing the best tasting, most nutritious food. Decades organic vital soil gives us much more vital beans that contain more minerals and allows us to cook them without, what we consider toxic, 'processing' chemicals.

Aduki beans Phaseolus angularis are one of Japan's most popular beans. In 1974 Eden's President traveled to Asia and purchased a shipment of these small red beans at the direction of Noburo Muramoto, author of Healing Ourselves. Shipped down the St. Lawrence River, half the load was dropped in Toronto and half in Detroit. These beans were the seed for our growers and initiated the commercial cultivation of aduki beans in the Western Hemisphere.

Eden Aduki Beans are expertly prepared at our certified organic, kosher cannery in east central Indiana. They are washed, soaked overnight, and thoroughly cooked with a bit of kombu sea vegetable. You don't taste the kombu, but its natural glutamic acid softens and enhances the flavor of beans. All water that contacts Eden for washing, soaking, and cooking is purified water.

Eden Beans are in custom made steel cans lined with baked on oleoresinous c-enamel that does not contain the endocrine disrupter chemical bisphenol-A (BPA). Oleoresin is a natural mixture of an oil and a resin extracted from plants such as pine or balsam fir. These cans cost 14% more than industry standard cans that do contain BPA. The can maker, Ball Corporation, tells us that Eden is the only U.S. food maker to date to use these BPA free cans. Eden Foods was acknowledged with a "Green Packy Award" in 2010 by Whole Foods Market Green Mission's Responsible Packaging Forum. The responsible packaging award was given Eden for the use of BPA-free cans in all 39 of its organic beans, chilies, rice & beans, refried, and seasoned beans.

All rights reserved by InStijl Media